This series contains 19 animated historical maps. For a preview, please consult the map below:

▶ Europe at the End of the First World War 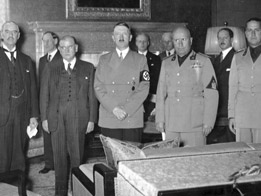 The First World War marked the decline of European domination in the world. Once the war was over, democracy and collective security seemed to triumph, but this hope was short-lived. The dissatisfaction created by the redrawing of frontiers, the fragility of new democratic regimes and the Great Depression plunged the continent back into war.

History of Europe between 1918 and 1942: Treaty of Versailles – creation of new States – authoritarian and totalitarian regimes – Munich Agreement – Molotov-Ribbentrop Pact – outbreak of the Second World War…

Europe at the End of the First World War

Respect for the principle of nationalities and the maintenance of their power influenced the victors in redrawing European frontiers, confirmed by the various treaties signed from 1919-1920.

Germany and the Treaty of Versailles

Seen as the instigator of the war, Germany lost a number of territories and had to pay the victors substantial reparations.

The Fate of Austria and Hungary

Austria and Hungary were established as two separate states and lost much of their territory.

The Fate of Bulgaria

Finland became independent after the collapse of the Russian Empire.

Independence for the Baltic Countries

Previously part of the Russian Empire, the Baltic countries became independent at the end of the First World War.

The devastation of war, economic difficulties and resentments created by the treaties threatened the democratic regimes and collective security of Europe.

The Irish nationalists fought for their independence and succeeded in creating the free State of Ireland in 1921.

Territorial conflicts in the regions of Smyrna and East Thrace ended with large numbers of Greek and Turkish settlers leaving their home.

A wave of authoritarian regimes in the 20s

During the 1920s, far right parties came to power in a number of European countries.

Reconstituted by the treaties, Poland remained under threat from its two powerful neighbours: Russia and Germany.

Created from pieces of the former Austro-Hungarian Empire, Czechoslovakia brought together several nationalities to form a single state.

A common language and ethnic ties influenced the decision to give the Southern Slavs their own state.

The Great Depression reinforced the authoritarian regimes in Europe. In the mid-1930s, dictators dominate international relations.

France: From the Third Republic to the Vichy Regime

In France, the military debacle in May and June of 1940 brought down the Third Republic.

Abandoned by France and England at the Munich Conference, Czechoslovakia was soon torn apart.

By signing the Molotov-Rippentrop Pact, Germany and the USSR sealed Poland’s fate.

Italy’s annexation of Ethiopia ended its alliance with France and England and pushed Mussolini closer to Germany.