This series contains 7 animated historical maps. For a preview, please consult the maps below:

▶ England looks to the West (second half of the 16th century)

▶ The United States: a territorial history

▶ The Portuguese and Spanish Empires 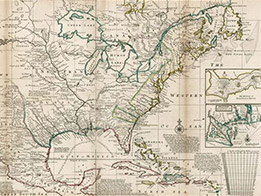 To various degrees of success, four European nations participated in the colonisation of North America: Spain, France, Great Britain and Holland.
In the second half of the 18th century, the British had obtained control over the most territory on the American East Coast, but they had to face rising discontent from the 13 colonies.

Travels of Jacques Cartier in Canada

In April 1534, Jacques Cartier left Saint Malo and sailed westwards. King François I of France had given him a commission to find a northern maritime route providing access to China and to discover islands and countries ‘rich in gold’.

In the early 17th century, France founded its first settlements in the St Lawrence Valley and Arcadia. 150 years later, Nouvelle France covered a substantial area between the estuary of the St Lawrence and Mississippi estuaries and Lake Winnipeg

Exploration of the Mississippi and the establishment of Louisiana

European exploration of the Mississippi River began with the travels of Jacques Marquette and Louis Jolliet in 1673.

In 1682 René-Robert Cavelier de la Salle reached the river’s delta and took possession of the regions he had crossed in the name of the French King: Illinois and Louisiana.

New France: Settlement of the territory

European settlements in Nouvelle-France experienced limitations in the regions around the St Lawrence Valley, Ile Royale and New Orleans.

Areas on the outer edges of these settlements saw an increase in their population due to the growing presence of trappers as well as a lucrative trade in furs.

England looks to the West (second half of the 16th century)

In the second half of the 16th century, England resolutely turned its attention to the West. It concentrated on the colonization of Ireland and launched several initiatives in North America.The first of these initiatives involved 6 maritime expeditions in search of the North-West Passage, which would make it possible to sail around the American continent to the North and facilitate trade with China’s wealth.

Foundation of the 13 American colonies

In 1606, King James I issued a Colonization Charter for two limited liability companies: the London Company and the Plymouth Company.

Virginia, the cradle of the United States

In the decades that followed the establishment of the colony of Virginia, England sent settlers to sites all along the American coast between New France, to the North, and Spanish-controlled Florida, to the South. The first settlers were mostly people who left Europe because of religious discrimination.